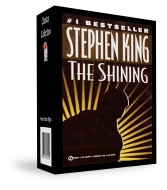 It was in this apartment, also, that there stood ... a gigantic clock of ebony. Its pendulum swung to and fro with a dull, heavy, monotonous clang; and when ... the hour was to be stricken, there came from the brazen lungs of the clock a sound which was clear and loud and deep and exceedingly musical, but of so peculiar a note and emphasis that, at each lapse of an hour, the musicians of the orchestra were constrained to pause ... to hearken to the sound; and thus the waltzers perforce ceased their evolutions; and there was a brief disconcert of the whole gay company; and; while the chimes of the clock yet rang, it was observed that the giddiest grew pale, and the more aged and sedate passed their hands over their brows as if in confused reverie or meditation. But when the echoes had fully ceased, a light laughter at once pervaded the assembly ... and [they] smiled as if at their own nervousness ... and made whispering vows, each to the other, that the next chiming of the clock should produce in them no similar emotion; and then, after the lapse of sixty minutes ... there came yet another chiming of the clock, and then were the same disconcert and tremulousness and meditation as before.     But in spite of these things, it was a gay and magnificent revel ...

The Island of Doctor Moreau

The Adventures of Huckleberry Finn